I am so happy to be back to stages! Missed your faces and your energy. Live music can't happen without you! Thanks for supporting local artists. Your love is music! 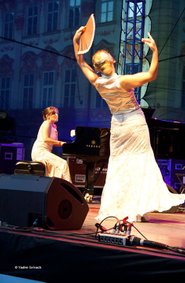 Made by Alberocoque around eastern Washington, 2109

With her self-released 3-CD set “A Life Soundtrack” (December 2019), Marina Albero has composed an intimate biography in the musical languages of old Europe, modern Spain, 1990’s Cuba and the US of today. Comfortable in the syntax and idioms of classical, flamenco, son and American jazz, Albero shares chapters on learning, love, loss, and life that will move and inspire you. Her musical story has been captivating audiences and musicians around the Northwest since she moved to Seattle in 2015.

“A life Soundtrack” began with 12 live performance videos produced in 2017 for her followers on Patreon.com/marinalbero. You can also find a related project, “Mikrotunes”, on Soundcloud where she released micro compositions regularly (2010-2011). For the first time, Albero crosses the online border to make a 3-CD set that covers the landscape of her journey so far.

Volume #2 “Agua” is an all improvised work. Like water, Albero adapts herself to the territory, flows from shore to shore, from the mountain springs to the rushing rivers, stays in the still iced waters and travels to the warm Caribbean, it sometimes sounds like the hidden rainforest waterfall, other times like the water drops falling from the ceiling of a cave.. As Bruce Lee said, “Be water, my friend”. On three tracks, the unique and generous musicality of Hans Teuber creates a complete new soundscape to explore.

Volume #3 “Music is Love” is a gratitude musical statement. Gratitude towards music and all that it brings to Marina’s life. Friends, connections, learning, challenges, healing, emotions, feelings, thrives, family… LOVE. On this record, Albero plays originals and jazz standards with her Seattle band and her kids who are also musicians. Backing her up, the band is a gathering of incredibly talented artists: Jeff Johnson, Hans Teuber, Jeff Busch and D’Vonne Lewis honor with their presence a playful space for music.

Personnel in "Music is Love":

Recorded and Mixed at Studio Litho by Floyd Reitsma